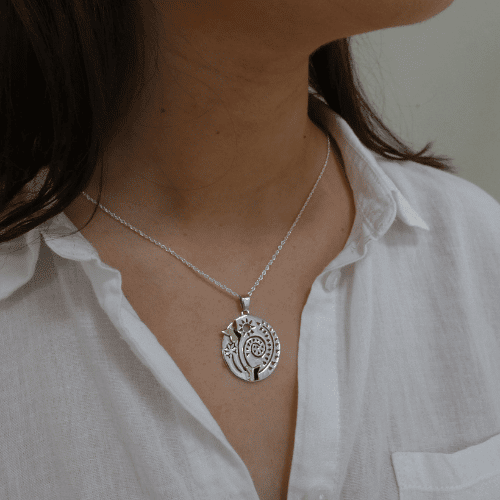 Amongst the most beautiful items we carry at Donegal Square are our Blue Frogs Celtic Carvings. Stunning wall hangings of celtic symbology carved from real mahogany wood, each piece is crafted one at a time and personally autographed by the maker. The carving and painting process is done entirely by hand, with full attention to detail. Beautifully crafted one at a time, each wood carving starts as a hand drawing. The finishing touch, what gives Blue Frogs products their spectacular luster, is a coat of buffed French paste wax. The French paste wax affixes on each item the mystery and illusion of age, as well as a functional and protective coat to prevent easy scratches. As education is one of our primary missions at Donegal Square, we take great pleasure in teaching our patrons about celtic symbology through pieces such as the carvings of Blue Frogs Company. Some of the greatest conversations with our visitors begin with, “Excuse me…what does this symbol mean?” Before we answer that, let’s tell you who Blue Frogs Company is!

The Man Behind the Curtain

Who is the master behind Blue Frogs Company’s unique and stunning collections? Joel Dournel-Zanni founded Blue Frogs in 1990 after trading out a life in Brittany, the Celtic part of France, for a new one in Aspen, Colardo. He spent two years traveling the world, gathering inspiration from the beauty of nature surrounding him, like a sponge. Once settled in Colorado, Dournel-Zanni decided to pursue a career in his life’s passion: wood-crafts. All things wood-crafts! In the beginning, Dournel-Zanni created primarily lamps and handmade paper products. As the number of clients grew, and has his own skills became more finely tuned, Joel expanded his repertoire and now creates a variety of wood-carvings ranging from bird carvings, Viking carvings, celtic design carvings, and knives. Each item we receive from Blue Frogs Company bears the recognizable signature of Joel Dournel-Zanni. A mark of authenticity.

At Donegal Square, we primarily carry Blue Frogs’ Celtic Creature and Motif, Cross, and Knot collections. Each of the symbols represented in these collections carries an ancient meaning in Celtic mythology, Zoomorphy (a term for the creation of celtic knots from images of animals, first employed in the designs within the Book of Kells) and cultural vernacular. We just sold the last of their incredibly detailed puzzle boxes, which we will hopefully receive soon!

The Celtic Creature and Motif Collection

What does the Creature and Motif Collection include? Amongst these pieces one can find hand carved Claddaghs, symbolizing friendship, loyalty, and love. Other carvings include vignettes of design from the most renowned illuminated manuscript, the Book of Kells. The Trees of Life symbolize the Druid belief in the link between heaven and earth, the cycle of life, and the interconnectedness of all creation. The Welsh Dragons are amongst the most iconic and familiar of Blue Frogs’ cravings, as the red dragon is the central figure on the Welsh national flag and has been a motif of Welsh battle lore for centuries. The Three-Stag wall carvings are a personal favorite of mine, the stags chasing after one another encased in a wooden, circular disk, intertwined with elongated celtic trinity knots. They seem to be racing into infinity!

Blue Frogs Company describes their Celtic Cross Collection as “…symbols of of hope, life, honor, faith, unity, balance, transition, and navigation.” And that is exactly what the celtic crosses signify.  Ancient Celtic crosses are the one of the oldest and most common structures in Ireland, and many are seen throughout its countryside and cemeteries. These crosses are considered the most important achievement in Irish sculpture history. There are many interpretations of the cross’ meaning. Some believe that the horizontal bar of the cross represents the earthly world and that the  vertical portion represents heaven. The conjoining portion represents the connection between heaven and earth. Other scholars believe that the number four holds great significance with four arms of the cross representing north-south-east-west, fire-earth-air-water, and mind-body-soul-spirit. The Celtic Cross was also known as the Sun Cross or Sun Wheel and was a symbol of Odin, the Norse god. The circle in the center of the Celtic cross represents the modern sun. Per modern interpretations, the Celtic cross’ circular portion symbolizes eternal life and God’s infinite love. According to Irish legend, St. Patrick introduced the first Celtic cross after the Celts had told him of a sacred stone that they worshipped, which represented the moon goddess. St Patrick made the mark of Latin cross through the circle and blessed the stone, creating the first Celtic cross! Breath taking variations, derived from the sights of Dournel-Zanni’s travels through the Celtic nations, can be found in our store.

Symbols of  life, love and eternity – without a beginning and without an end. There is something romantic about the celtic knots, the way in which they capture a continuous flow of movement, shape, and time. Blue Frogs’ wood carvings manifest the feeling these symbols evoke. One of the easiest knots to identify in this collection is the Trinity Knot. It consists of three interlocking circles, which could have symbolized earth, air, and water, or mind, body, and soul. When Christianity was introduced to Ireland, the Triquetra became known as the Trinity Knot which symbolized the persons in one God: the Father, the Son, and the Holy Spirit. Another knot featured is the Sailor’s Knot, which is believed to have been created by sailor’s on their long voyages. A woven rope, weaving in and out of itself, this knot is known to symbolize harmony, love, friendship, and affection. Now, the Love Knot means exactly that. The knot resembles two interlocking hearts, surrounded by an oval shape. Joel Dournel-Zanni’s renditions of the Love Knot are simply the perfect gift for an anniversary, wedding, or any occasion!

If we have peaked your interest, come visit us at Donegal Square and explore the variety of Blue Frogs Company’s celtic wood carvings. (We even carry a few of his Game of Thrones inspired pieces, to include a carving of the show’s direwolf, Nymeria. Die hard fans, you know what we’re talking about!) The quality and the heart poured into each item can be felt at a mere glance, Dournel-Zanni’s personal touch always impresses. We hope you just learned a little bit about the meaning behind these designs. Now you’re almost an expert 😉 ! Slainte, everyone!